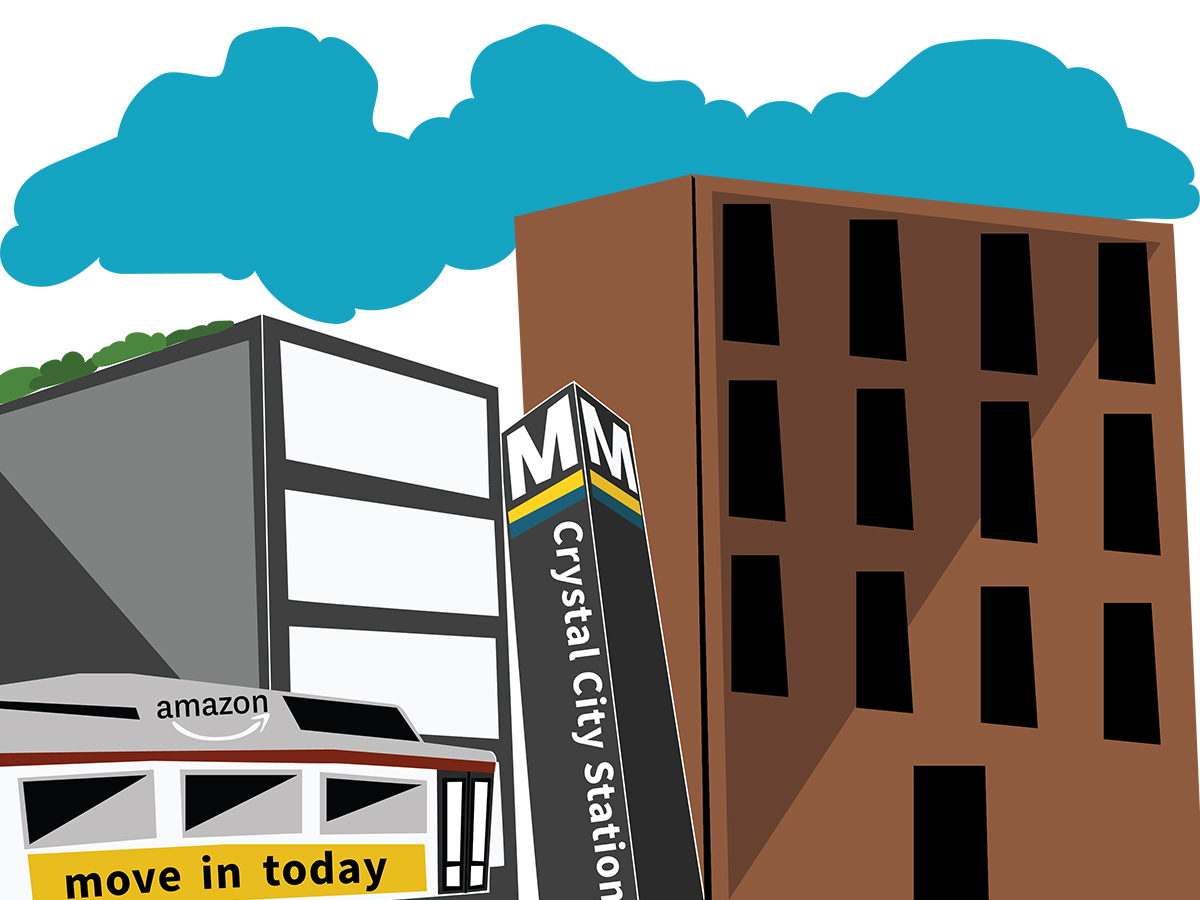 While job openings begin to pop up in New York, people are wondering when Crystal City will start to hear some noise — here’s what people are talking about in Northern Virginia!

25,000 new jobs, new business and people to fill the many sparsely-occupied buildings that fill the streets of Crystal City. In 2005 the city lost many of its employees to the Department of Defense’s Base Realignment and Closure project (BRAC), which consequently took most of the hustle and bustle with it, too. Since then Crystal City’s largest claim to fame would be the Pentagon Mall down the road, but the community remains relatively quiet… for now.

Because of Crystal City’s recent history, Amazon could actually be a good thing for the city — with all the open space, transit access, and nearby talent the area is kind of sitting on a real estate goldmine.

Once the news broke about HQ2 realtors in the area were flooded with phone calls for properties that barely even had any showings booked. We tapped into the housing speculations in December of 2018, but they story goes even deeper than that. Which brings us to asking why Crystal City for Amazon?

A Crystal for the Taking

Well, as we’ve stated, the city is already set up with buildings that have been sitting pretty for years — Amazon will still add its personal touch and flare, but that’s a pretty decent setup. The proximity to the nation’s capitol also plays a huge role in why Bezos wanted to head east.

The Pentagon is currently exploring cloud data companies for a $10 billion deal for one single vendor to build out a cloud enterprise. Even by government standards, this is a massive deal and incredible win for whomever they choose, which is why Crystal City was a pretty important step for Bezos securing Amazon’s spot in a close competition with companies like Oracle and IBM.

Other issues like drone usage for packages and the US Postal Service raising shipping rates have Amazon wanting to get close to all the action. There’s also the advantage of being where many federal employees live or surround. Which brings us to Crystal City’s accessibility via public transportation.

Transportation for the Future

Per the contract, Amazon is set to invest $570 million into the area as well as $195 million into the existing transportation system. The investment is planned to go to creating a second entrance for the Crystal City Metro stop, a south entrance for the Potomac Yards Metro stop, improving the Crystal City-Potomac Yard transit system, creating a pedestrian walkway from Crystal City to the National Airport, and turning Route 1 from a confusing, traffic-induced road to an urban street complete with wider sidewalks and better structured intersections (if everything goes according to plan).

All this possible construction is probably causing some eye rolling to happen, but the promise of improved and increased transportation options is on the horizon. And with better transportation and access comes more housing.

Listings in the National Landing area have been quick to advertise their proximity to Amazon’s HQ2, helping some to increase their previous selling price. Crystal City locals are concerned with how everything will come together in the area though, seeing if the expected gentrification will leave some high and dry, unable to afford their once-called homes.

Tracking the numbers from December 2017 to December 2018 showed a 5.4% increase in home sales, 73.75% more contracts signed, and the amount of active listing in Northern Virginia have decreased by 20% and appear to be continuing to shorten.

Don’t Be Late for School

Crystal City will become home to new Amazon employees who will be making $150,000 a year, which means that gentrification will be rearing its head to create a full blown for community for all walks of life. Since talent is contracted to 25,000 new jobs over the next 12 years people will be looking to move for the long hall and that means building a foundation for young professionals, millennials, families, and everything in between.

So get ready to hear “Go Hokies!” because Virginia Tech (located in Blacksburg, Virginia) will be opening a satellite campus at the new HQ2. With the school having one of the top engineering programs in the county, it’s no surprise that they’d want to move into the Amazon. And that’s pretty much the plan as the commonwealth promised Amazon more graduates with tech-related degrees (i.e. computer science, robotics, etc).

Nothing is going to happen overnight, but you can except to see some pretty big changes to Northern Virginia’s Crystal City (aka National Landing) as 2019 gets rolling.