With companies such as Amazon, Starbucks, and Microsoft calling Seattle home, the number of daily commuters coming into the city every day is only going to continue increasing. In most cases, this means a corresponding increase in the number of cars on the road, but Seattle is leading the fight to minimize single-occupancy vehicle commutes. In fact, despite adding 60,000 jobs from 2010 to 2017, the city actually decreased the drive-alone rate, according to a report from Commute Seattle. So how did they do it?

The secret to their success? Transportation Demand Management (TDM). The term encompasses a lot of things (and you can read about them here), but at its core, it refers to any attempt to impart behavioral change outside of infrastructure. Adding a new bus route? Not TDM. Adding shower access to your office so people will feel comfortable biking to work? Extremely TDM.

TDM requires buy-in from several parties in order to be effective, so compliance from employers (both small and large), real estate developers, and property managers is crucial. 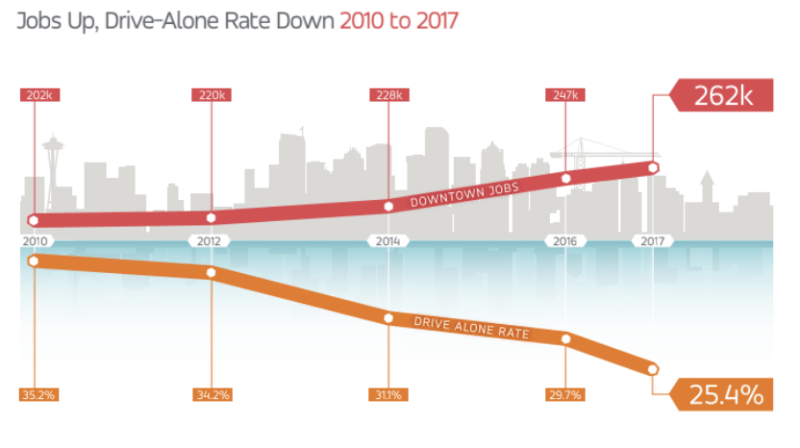 Starting January 1, 2020, all employers with more than 20 full-time employees will be required to offer commuter benefits. The requirement just refers to pre-tax transit options, but many employers choose to go above and beyond to attract great talent.

Although the Commuter Benefits Ordinance doesn’t go into effect until 2020, the Commute Trip Reduction Law has been in effect for larger employers since 1991. Under this law, employers with more than 100 people who report to a single site at specific hours have to follow a set of regulations. Most importantly, they have to continue following these regulations as long as they are in business — TDM isn’t a one-and-done situation for employers in the way it is for real estate developers.

This requires appointing someone to be an employee transportation coordinator who will liaise with the City, submit program reports every two years, and conduct a commuter survey every two years. The continued maintenance is the most important part as companies change and grow alongside available mobility options.

Commute Seattle is an amazing resource, offering essentially everything you might need as well as some things you didn’t know you needed. They’ve got info on the goal you’ll need to hit — it’s different per neighborhood, so you’ll want to make sure you’ve got the right one in mind. They also have information about how to run the survey and what you’ll need to do in order to have your program reports approved.

Commute Seattle’s toolkit gives you the full range of options to include in your program to reduce the drive-alone rate, but we have a few that we like the best. Sure, you can go ahead and provide reduced parking rates for high-occupancy vehicles, but going the next step and deciding to charge for parking by the day instead of by the month? That’s really going to make a difference in how many people choose to drive to your office.

Of course, you’d have to do something like that in tandem with increasing other options to get to the office. That could include things like providing a shuttle for your employees, which works best when you’re slightly removed from the nearest main transit center. If you’re in an area of town that’s more bikeable, you can make sure you offer bike facilities — the most important of which being on-site showers and secured indoor parking. You can also subsidize transit directly, rather than just offering pre-tax options; there are several types of ORCA cards made specifically for businesses you can read about on their site.

We’d also be remiss if we didn’t mention offering real-time information about transportation options, which is what we do at TransitScreen. Having the power to make decisions about the best way to get home can improve commutes immensely, and the impact of real-time information on behavioral change is huge. This is particularly important for modes like buses or shuttles when arrival times aren’t as obvious.

You’ll be charged a fine of $250 per day, so you should definitely do it. Many of these options actually give businesses tax benefits. Also, decreasing the drive-alone rate helps everyone!

Well, Seattle Children’s Hospital has an incredibly comprehensive plan. As one of the largest employers in the city, they have truly gone above and beyond to offer benefits to their employees that encourage them to leave their cars at home. They’ve already reduced their drive-alone rate from 50% to 38.5% since 2004 with ambitious goals for the future, so we’d say they’re doing a great job.

Which unique things have they tried? If an employee pledges to bike to work at least twice a week, they’ll actually give them the bike. They’ll even pay you not to drive — $4 per day! When you consider how much a parking space costs to build? It’s not even a contest which makes the most sense.

The City of Seattle is doing as much as it can to make these requirements as easy as possible for all parties involved. That includes making infrastructure changes that will continue making TDM easier to implement. The Link Light Rail extension is a main priority, expanding transit’s reach and making it more accessible for more people.

Allowing new private companies such as rideshare giant Uber and Lime to have dockless bikes and scooters in the city is also a big game-changer.

Because these micromobility options require less infrastructure, they can be easily added to help address the first- and last-mile problem. Though not ideal for great distances, they have made getting from point A to point B far easier.

TDM is here to stay, so it is time to hop on the train. The effort that you put in as an employer will reflect in the behavior of your employees; making TDM a priority in the workplace will pay off in the future, even if it’s a little bit of work upfront.

That doesn’t mean you have to offer everything under the sun! That said, it can be worth it to go above and beyond with what you offer. Putting in a shower at the office will show your cyclists on staff that you care. Providing a company shuttle, even if it’s only a few days a week, can make a huge difference for anyone who lives further out. It’s the little things that will go a long way in getting employees to change their commuting decisions — and it all starts with you!