If you’ve ever been to Atlanta, you’ve seen the enormous highway surrounding it. Boasting 15 lanes, it’s truly a sight to see. Unfortunately, even with this behemoth roadway, traffic issues have not gotten any better. In fact, simply because there’s so much road space, there’s an increased incentive to drive. More than 85 percent of Atlanta’s commuters choose cars. 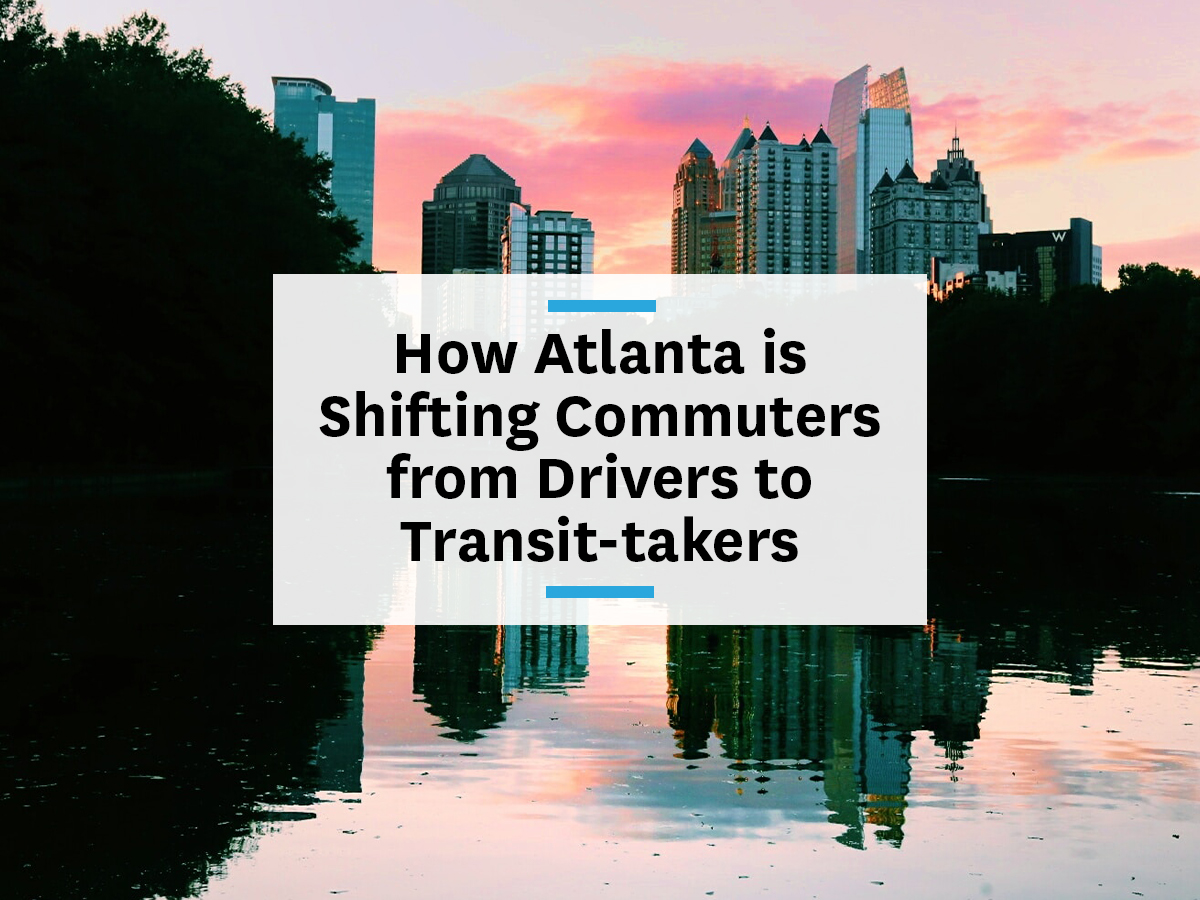 The City of Atlanta has recognized these traffic concerns and is setting plans in motion to mitigate these problems that don’t involve adding more lanes to the highway. By constructing new transit lines, implementing TDM requirements for employers and new developments, and allowing more private mobility options into the city, Atlanta is joining several other cities around the country to eliminate significant traffic issues.

Transportation demand management (TDM) is a growing initiative in cities working to reduce drive-alone commutes through behavioral change. The number of drive-alone commutes in Atlanta is an issue the city has recognized and is taking steps to minimize. Atlanta’s Transportation Plan is the first step in the future of sustainable mobility in Atlanta.

Atlanta’s Transportation Plan (ATP) was finalized in 2018 as the first step in shifting the city from being car-centric to mobility-centric. Two of its major goals are to decrease drive-alone commuting rates to no more than 35 percent and increase transit, biking, and walking commutes from the current 17 percent to no less than 35 percent.

Building off the city’s 2008 Connect Atlanta Plan, the idea is to take the initiative a step further by securing and leveraging federal, state, and local funding for new transit infrastructure projects. This would make space for TDM initiatives to be more effective — without a base level of infrastructure in place.

There’s also a plan to work with MARTA for last-mile transfers to bikeshares. Atlanta’s Relay Bikes and MARTA have placed bike docks directly outside or within two blocks of rail stations throughout the city to make the transition from rails to pedals as seamless as possible. There are discounted Relay Bike rates for corporate account participants, student riders, and low-income users. The plan is to make the time between MARTA and your final destination as short as possible.

Although the ATP has a five-year implementation window, developers in several zoning districts around the city have requirements that already need to be met to obtain project approval. The districts with requirements as of now are Downtown, Midtown, Buckhead Village, and Buckhead and Lenox Station.

There are various factors influencing the requirements, including the zoning district, parking availability, square footage of the building, use of the building (residential or commercial office), as well as a few more that can be found on page 12 and 13 of the TDM plan. The goal of these requirements is to encourage residents, employees, and visitors to travel by methods other than driving alone. Developers can choose from a variety of options to meet these, all of which are outlined in the current documents.

With the City of Atlanta making strides in TDM enforcement, there’s no current regulation for employers. However, there are talks of employers with 250 or more employees being required to implement TDM measures in the future. Luckily, if and when these requirements are put in place, the city has put together a menu of measures (page 30) companies can choose from to get started. Just because TDM efforts aren’t enforced for employers, that doesn’t mean you can’t get ready for them!

Cities have been working on their TDM efforts for a while now, and San Francisco is one of the best. Because of the success of its SHIFT program, Atlanta is modeling their efforts after it. The basis of the plan is to essentially grade developments depending on both impact and location to set a TDM plan in place before breaking ground.

Like in San Francisco, the city of Atlanta will work to provide a menu of measures to be implemented so the burden is lifted from the developers, property managers, and employers. In this system, various options would be worth points, and the development would need to obtain a certain number of points to get certified.

Points correspond to the level of difficulty to implement and how big of a difference it would make in changing behavior; something like real-time transportation information is easy to install and thus not worth as many points as providing a shuttle back and forth for residents to transit stations. The idea behind the plan is to allow developers to mix and match, customizing what makes sense for each property.

An essential part of the plan is that it requires follow-up, so a developer wouldn’t be able to just run a shuttle for a week and then stop. Through regular check-ins with the city, these efforts would be measured and maximized.

Although TDM requirements only currently affect a small portion of new developments at this time, that doesn’t mean employers should sit back and relax. The stress long commutes cause is as much (if not more) of a problem in Atlanta as in other, more transit-rich cities, so the benefits offered for employees should match.

It’s only a matter of time before Atlanta makes TDM measurements a requirement for all, so it would be worth it to get ahead of the game. A full building makeover or new company policy isn’t necessary, but adding a bike room or showers at the office would be a good place to start.